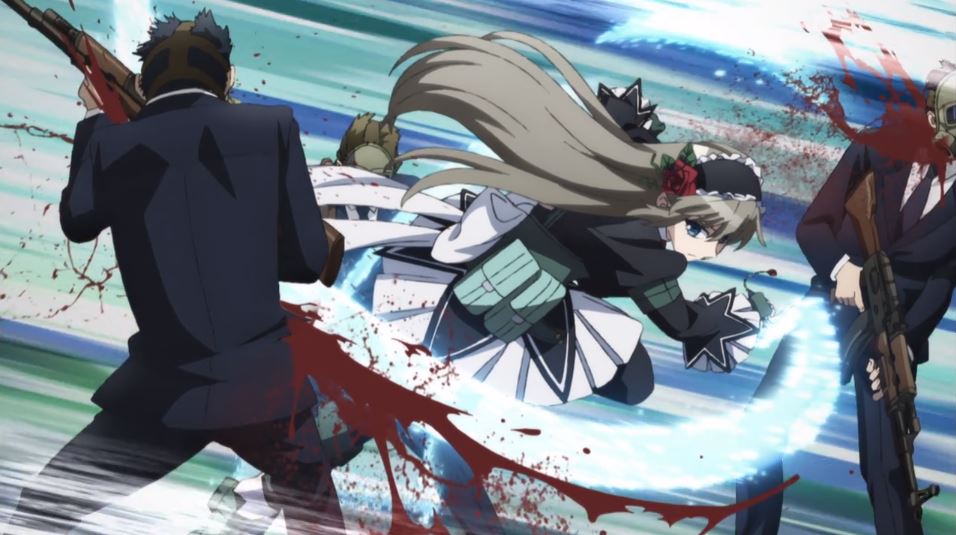 What’s it about? The invasion of the Disas necessitated the creation of a special combat unit: magical girls who gained special powers by fusing with spirits. Three years after the Disas were driven out, Asuka is attempting to attend high school like a normal teen—but defeating the Big Bad didn’t mean the end of conflict.

There’s something that sets me on edge about modern dark magical girl series, which is perfectly embodied by a scene early in the premiere: a girl catches sight of the heroine and says, excitedly, “I want to be a magical girl!”

To which her mother replies, leading her away, “You don’t want to be a magical girl, it’s dangerous.”

There’s a moment when Asuka rushes to save her new civilian friend from a terrorist attack and actually does save her rather than being re-traumatized for maximum edginess, which was when I gained a fraction of faith that the series might actually be interested in engaging with the themes that normally characterize magical girl series rather than wallowing in its gimmick. The depiction of Asuka’s PTSD flashbacks is even trying for tastefulness, though I’m not entirely sure it succeeds.

It is still a Grim and Edgy series, mind: Asuka quit fighting because her parents were kidnapped and mailed back to her in pieces; there’s lots of bloodspray during the combat sequences; and there’s a glimpse of a rather intriguing box stuffed with disassembled people-parts.

But for me, at least, the gory trimmings are offset by the sense that the series isn’t set on being relentlessly misanthropic. If I’m honest, the series’ attempts at seriousness often strode right on over into hilarity. When Asuka very seriously stated that “I’m not killing anyone now that I’m in high school,” I had to stop the stream and laugh for a full thirty seconds.

Aside of the gore there are a few other things to aware of. There’s definitely boob nonsense going on: Asuka’s costume vacuum-packs her breasts into presumably weaponized torpedoes, and we meet the Big Bad via a shot of her budding amoeba-titties glistening with drops of water. I also get a strong yandere lesbian vibe from one of the subordinates.

Series like this are always hit-or-miss on whether they’ll tip their balance from camp into unpleasantness, but I’d be lying if I said I didn’t kind of wanna watch another episode.