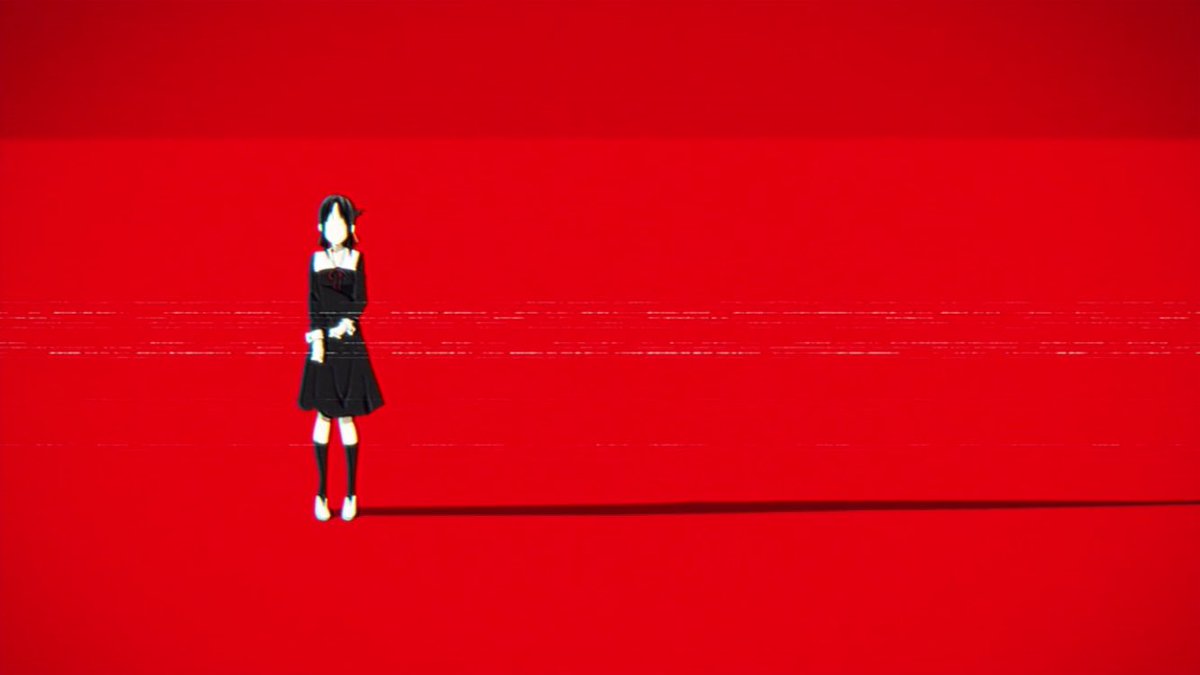 What’s it about? According to student council vice president and president Kaguya Nishinomiya and Miyuki Shirogane, there’s no such thing as a truly equal relationship. Even the happiest-appearing couples are locked in an eternal power struggle as each party tries to gain the upper hand over the other. These two are each determined to force the other to confess their feelings, but refuse to show any sign of affection themselves.

Story premises based on power are risky business. Without carefully, conscientiously balancing the scales, it’s easy for them to descend into abuse and manipulation. I admit, I’m impressed with how Kaguya-sama: Love is War handles the question of power in relationships in its first episode, especially for a goofy comedy. I may not agree with the characters’ beliefs about relationships… but to be honest, I don’t think the writers do either.

From the outset, Kaguya and Shirogane’s levels of privilege must be balanced. Vice president Kaguya Nishinomiya comes from one of the wealthiest families in Japan; Shirogane comes from more common stock, but has his own male privilege. This is a great way to handle it; otherwise, things could too easily slide into a Boys Over Flowers-style slugfest where the boy uses all his power to torment his female love interest.

Luckily, there’s never a feeling that one has the power to override or overwhelm the other, because that would defeat the entire point of the series: two dipshits refusing to admit to their feelings because they’re more interested in trying to “win.” If they would just calm down and confess their own feelings, they’d probably be much happier, but their hyper-competitive natures make that basically impossible.

Now, there are people out there who believe it’s natural for romance to have a combative element beyond simple banter. People who treat sex as transactional, or treat every conversation as if it’s a debate, and are only concerned with winning or losing fights rather than coming to a common conclusion. It’s a major issue, especially in heterosexual relationships, and it leads to nothing but misery and dysfunction. I was concerned that Kaguya-sama would be sincerely espouse that idea, but it seems like, no, it’s just these two idiot kids who are too emotionally stunted to realize what’s going on.

It’s easy to tell from the outside that Kaguya likes Shirogane and vice versa. Their determination to get the other to confess comes largely from mapping their own feelings onto the other. To confess is to be vulnerable; to be vulnerable is to show weakness; and to show weakness, in their world, is unacceptable. So, they each must force the other to admit their feelings first to avoid that moment of vulnerability. Their constant games of nth-dimension chess are just an attempt to spare their own feelings. It’s actually kind of cute and makes it easy to root for them.

The episode, divided into four skits, keeps things equal by handing out victories and defeats equally. Neither outmatches the other, and they’re just as likely to have their plans thrown into chaos by Chika, the student council secretary who cheerfully and obliviously stomps all over their mental chess. Chika adds an important sweet note to the constant salt-soaked atmosphere between Kaguya and Shirogane. The way they get flustered by her interference adds an important humanizing note between them as well, lest we forget that they’re just two boneheads who don’t understand their own feelings.

This is all brought together by Makoto Hatakeyama’s skilled direction. The wacky premise allows him to cut loose compared to, say, Showa Genroku Rakugo Shinju or Record of Grancrest War, and he brings a ton of visual panache to their internal calculations and monologues.

The only issue with Kaguya-sama is that by the end of the episode, the humor was starting to wear thin. I wonder if it would have worked better as a short, delivering one or two sketches before things have a chance to get old each week. For me to make it past more than a couple episodes, they’ll also have to deliver something more—some sort of character development or growth—to keep things from getting too one note. I’m just not quite ready to give in yet.