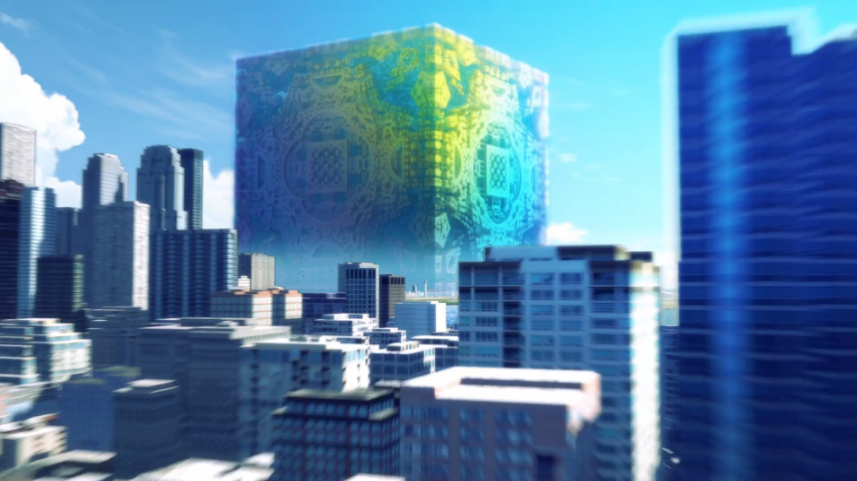 Kōjiro Shindō is a highly-skilled negotiator working for the Ministry of Foreign Affairs. As his plane at Haneda airport prepares to take off, a huge mysterious cube appears from the sky. ‘It’ expands rapidly, and absorbs the passenger plane and its 252 passengers. The cube’s name is “Kado”. A strange being called Yaha-kui zaShunina appears from within Kado and tries to make contact with humanity. Shindō, who was been absorbed by Kado, ends up taking on the role of mediator between Yaha-kui zaShunina and humanity.

Oh, boy. This is a rough one. What we have here is a show I very much want to like: a high concept sci-fi story about first contact with the potential for a uniquely interesting protagonist. Unfortunately, this show is already setting itself up in a worrying pattern of meandering quietly along for 20 minutes or so, then introducing a big twist in the closing minutes. If it’s already repeating tricks this early on, including an almost identical zoom-out from the giant alien cube that may or may not be menacing the city, it’s somewhat worrisome for episodes to come.

I say episodes because this premiere is in fact double length, with an “episode 0” prologue that’s pretty necessary if you want to put any kind of emotional investment. It introduces Shindo and his “coworker” Hanamori in their role as bureaucrats and serves as an object lesson for how forthright, serious Shindo works as an effective negotiator, which on its own works pretty well as a quiet character drama. Then five minutes from the end the two get on a plane, everything turns from 2D animation to 3D cel-shading, and their plane gets absorbed by the giant alien cube.

That’s kind of Kado in a nutshell, actually. It has some really great moments and only a loose idea of how to apply them. The first episode is almost a beat for beat retread of episode 0’s ending with a few extra shots thrown in, managing to feel entirely pointless because anyone who watched the prologue saw this literal minutes ago, and anyone who skipped the prologue isn’t going to care about these two characters at all. Shimmery purple goop eats up poor Hanamori as we watch the plane being absorbed from the inside….and then the rest of the episode wastes the tension its built entirely by focusing on external efforts to figure out what the cube is and what it wants, introducing way more characters than I can be bothered to keep track of along the way.

The key to Kado’s success will most likely lie in whether it decides to narrow its focus or continue episode 1’s Emmerich-style cast of thousands approach. We have several generically handsome young men on offer, a lot of older bureaucrats, and the Discount Kaworu Alien who appears at the end of episode 1. There’s a relative dearth of women in the cast, though both introduced thus far – a quirky scientist who’s one traumatic backstory from a Joss Whedon character and an officemate of Shindo’s – are at least somewhat hands-on in the plot and portrayed without fanservice. If we were to focus on rounding out a cast of five or six core individuals we could have a fairly tight thriller on our hands with enough of a human element to excuse the already somewhat ham-fisted writing (Shindo, giving a speech about negotiating on the plane, talks about how negotiating is about trying to get what’s best for both parties even if you never find THE RIGHT ANSWER; its subtlety blows the hair right back, truly).

The 3D animation is something of a disappointment after the traditional 2D animation used for the majority of episode 0 – the cel-shading looks great for the cube itself, but it limits the expressiveness of the character models and makes things look a bit stiffer overall (which wouldn’t have been nearly as noticeable if they hadn’t given us traditional animation to compare it to directly). I’m hooked enough by the central question to give this at least three episodes to win me over, though it holds equal potential to become the sort of show that spouts a lot of poorly written, vague philosophical twaddle while bouncing between more characters than it can adequately develop.

…I’m not gonna lie, I’d also be pretty happy if it turned out to be a “teach the alien envoy about Earth” sort of show, too. Just as long as it stops spending every episode twiddling its thumbs so that it can spring end of episode twists.

Comments are open! Let us know what you thought of the show! Please read our comments policy before joining the conversation and contact us if you have any problems.