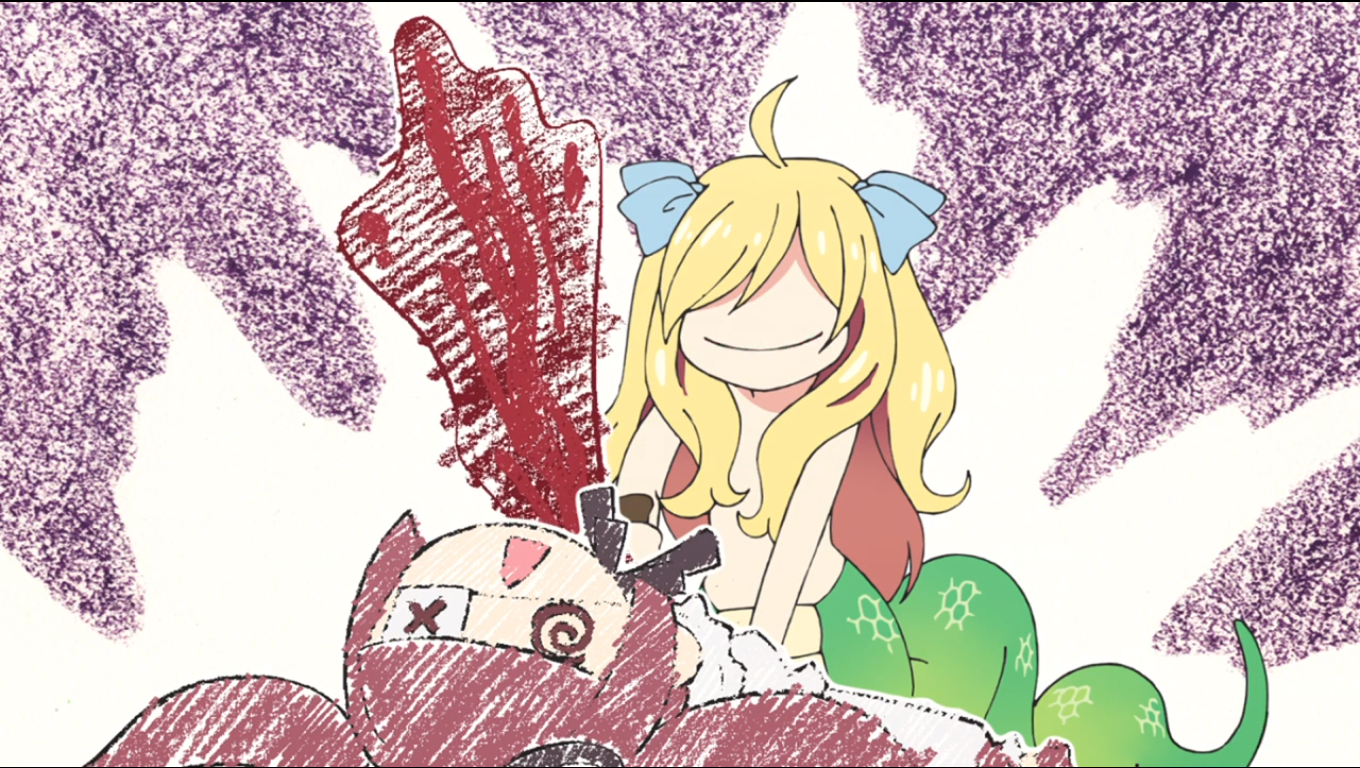 What’s it about? When a summoner contracts with a demon, the demon becomes a servant until the summoner’s death. So begins Jashin-chan’s quest to murder Yurine and get back to Hell. Unfortunately, she’s not having much luck.

Dropkick on My Devil!! is not terribly interested in preamble. The opening credits explain the backstory in song form, and then it’s right into a dinner party with the five members of the main cast. While not completely devoid of character, this is a show clearly proudest of its schtick—meaning it’ll probably be a love it or hate it venture for many.

And in fairness, it’s not a bad schtick. The visuals are unremarkably cutesy, formed at the meeting place between comedy-chibi and moe-blob, which makes them ideal to contrast against the show’s brutal cartoonish violence. The title gives away that this is a slapstick series, but it doesn’t prepare you for the amount of gore on display, which is probably Devil’s secret ace.

The opening sketch is something of a dud. The characters all fall into fairly simple comedic archetypes—with a few curveball choices like bug-eyed perpetually guilty angel Pekola—but the setup of the dinner scene isn’t fresh enough on its own, and since this is our first time meeting them as the audience, there’s no investment in the character dynamics either. The result is a draggy five minutes until the violence breaks out.

This shows knows violence. While there’s definitely a danger of the joke getting stale, as every story in this episode is punctuated by Jashin being somehow brutalized, each instance in this episode is visually unique enough to be appealing.

Jashin’s body is about as durable as Wile E. Coyote’s: though she crunches, squishes, and spurts blood, there’s very little sense of agonized suffering, and she pops back to normal with little to no fuss. And the visuals themselves know how to mix in detailed violence for shock comedy while keeping in line with the overall cartoonish vibe. There’s even a cute cameo by Bruce Campbell, so I suspect this is made with horror fans in mind.

As a gag comedy goes, it has enough hits to make it at least a tolerable and watch, and the ending credits suggest a larger cast in order to keep things lively (including what looks like a woman trying to embrace a Gay Panicking  Jashin, to my eternal long-suffering annoyance). It’s not clear whether the show wants to build in some actual warmth between its characters—the end of the episode hints that direction, only to pull the rug out—or carry on showing them as mutual punching bags that the audience can enjoy free of guilt.

The latter would likely get stale quickly, but the former risks becoming mean-spirited if it doesn’t know how to balance the dynamics and opts to sacrifice hard-won emotional stakes for the sake of a gag. It’s a gamble on how well the show will do from here, but if you want a Cute Girls show that’s got a surprisingly violent, un-cutesy streak (and no sexualized nudity, despite Jashin being permanently topless), this might be your bag.