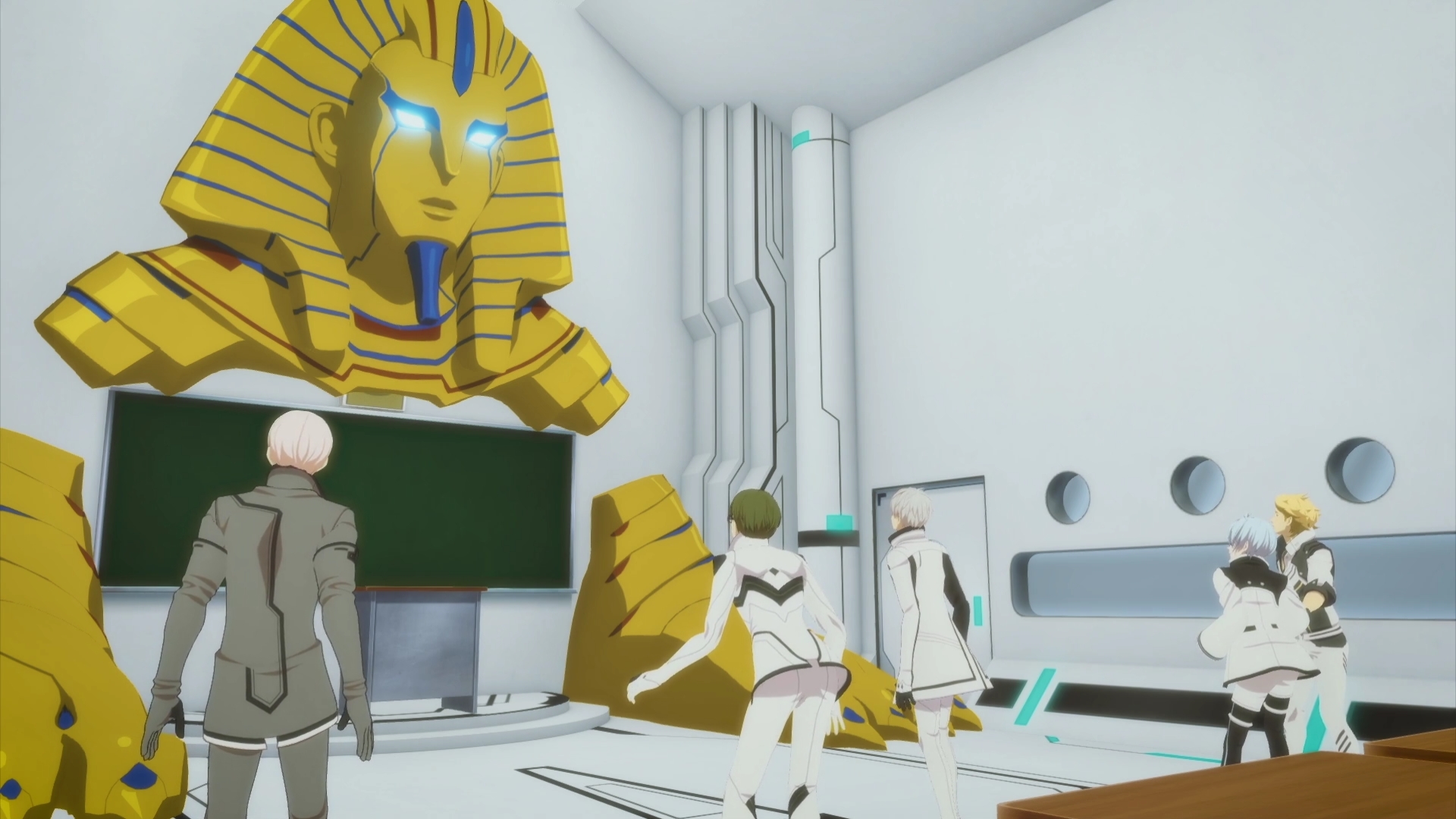 What’s it about? Junpei Shirayama finds a rock at school one day that ends up dragging him, three classmates and their science teacher into a parallel anime universe. The five dudes must solve a Sphinx’s riddles to save the earth or die trying. The rock has anime eyes.

Yet, for all the fanfare lent to Dimension High School being a show that transcends reality, it’s kinda boring how the fight for the fate of the 3-D world lies on a series of brain-teaser puzzles.

Even with the whole “if you fail, you die” stakes, the show doesn’t make you feel like there’s any real mortal danger for anyone like a game of Duel Monsters in Yu-Gi-Oh. Even if someone does die, the characters are so shallowly played as bishounen stereotypes that you kinda just shrug when one of them gets killed to serve as an example of what happens when the boys fail to answer a riddle. (It’s okay, he comes back.)

I can’t even be bothered to remember what their names are. They are main dude, the cinnamon roll, sports man, glasses, and the cool teacher. That’s it, that’s their names now, because that’s all there is to their characterization.

Oh, okay, I guess there’s also Spudio the 22nd, the talking meteorite with a face drawn in with a Sharpie. He’s a character, I guess.

And there’s also Sphinx Paramesos, who I’m kinda feeling is really leaning heavily into being a garish display of cultural appropriation more than anything.

So the characters are kind of boring and the story isn’t exactly riveting, but how about that whole decision to mix the 3-D world and anime world? Yeah, sorry, this looks pretty bad, too.

The campy acting and visual effects in the real-world sections aside, the show screams low production quality once it enters the “anime” section. Each actor physically acted out their animation sections by having their movements mapped to a motion capture device. The rigging, unfortunately, isn’t all that sophisticated and prone to a spate of clipping. For better or worse, the show’s attempts to make light of the clipping issue turns out to be, what I thought, the funniest part of the episode.

But even then, I can’t help but point out whoever did these subtitles has made some odd choices and blatant errors. The aforementioned highlight of the show is marred with superfluous profanity that isn’t there in the Japanese (see below). Also, one of the subtitles towards the end of the episode, if you’re still paying attention, features a straight-up confusing mistranslation. (Thanks to a supporter from the AniFem Discord for pointing that out for me, because my eyes had glazed over by that point in the episode.)

Are ya taking Japanese lessons? Because the puzzle required a firm understanding of the Japanese syllabary along with a basic vocabulary of the Japanese language. Even I had to listen to the solution twice before I figured out what exactly happened. A series made in Japan isn’t required to cater to a non-Japanese-speaking audience, of course, but it does create one more barrier of entry in an episode with plenty of them already.

So is there anything good about this show at all? Well, given this is a review for AniFem, I’m happy to report there’s no misogyny here! Actually, there are no women in sight.

Dimension High School only has its technical premise of being a hybrid of live-action and animation to sell itself as a novelty. There is very little else to make this show appealing or engaging. I wouldn’t really dedicate much time to it unless you’re into one of the actors or just a fan of really campy work.

Chiaki Hirai is a writer and freelance translator working out of San Francisco. Her personal accomplishments include: writing an undergraduate thesis on Touhou Project, getting blacklisted by TokyoPop, and interviewing the creator of Sudoku. In her free time she screams about her kinks and urban development on her twitter.