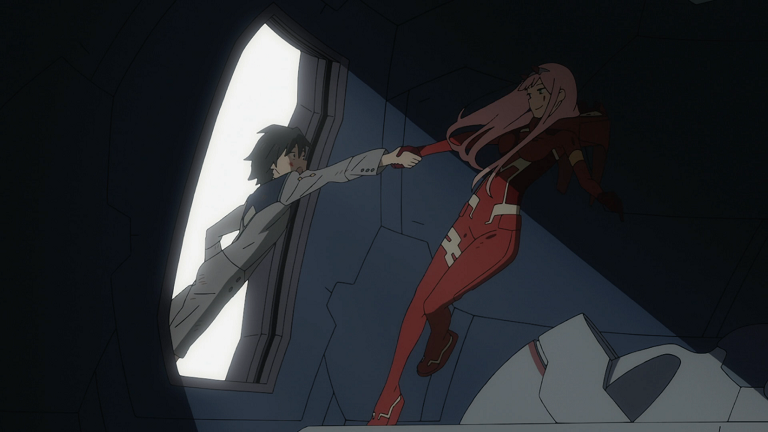 What’s it about? From a young age, boys and girls are paired up to pilot mechas that defend their world from monsters called “klaxosaurs.” Unable to synchronize with a partner, Hiro feels as if he has no place in the world—until a young pilot known only as Zero Two arrives at his base and invites him to become her “darling.”

This is a big ball to untangle, and right at the end of the premiere deluge, which is just unfair to my tired, tired brain. DARLING in the FRANXX has the potential to be an engaging mecha series about lonely kids and cultural pressures to “pair up” that challenges the traditional “man as aggressive, woman as passive” relationship dynamic. It also has the potential to be a queer-erasing mess of overused genre cliches that relies on harassment and fanservice to portray sexuality and romance. And while I want to believe it’ll be the former, I can’t quite shake the feeling it’ll wind up being the latter.

On the uncomplicated side, FRANXX is one of the most technically impressive premieres of the season. It succinctly sets up its world and story through mostly natural dialogue and actions, and establishes the base personalities of its two main characters while still leaving room for them to grow. The narrative teases out just enough information to suggest there’s more going on under the surface, but not so much that we’re overwhelmed with details.

The animation and direction are vibrant and striking, both during quieter character moments as well as in the big action sequence that takes up the latter half of the episode. There’s a real sense of weight and physicality to the production, whether it’s someone casually flipping their hair or a monster smashing into a building, and the fight scenes conveys chaos without being confusing. It’s well-paced, well-made, and well-defined.

Things get a lot dicier once we start dealing with the actual content of that narrative, though.

For starters, this is one of those premises that’s in danger of not only ignoring queer folks, but actively erasing them. The story centers around mechas that must be controlled by a (presumably cis) male and female pilot paired together, and the sex metaphors are not subtle. The women are “pistils,” the men are “stamen,” and Zero Two “partners” with Hiro via smooching. Oh—and these kids have been told that if they can’t sync up with an opposite-sex partner, then they have “no value.”

In FRANXX‘s defense, there are ample hints in this first episode that it knows its child soldier system is broken and intends to challenge it going forward. It’s totally possible that one of the ways it’ll do this is by at least acknowledging the existence of gay people (I’m not so optimistic as to hope for any ace, intersex, or trans representation, but I invite FRANXX to surprise me). If the premise is an automatic deal-breaker for you, I’d recommend waiting and checking back with someone who is watching it to see if it ever addresses that particular elephant in the room.

There’s also the matter of sexual harassment, of which this premiere has in small but off-putting doses. First, a head scientist casually grabs his subordinate’s butt. Her response is full of blushes and pouts that indicate she’s upset, but in such a way that it’s intended to make the uptight career woman seem “cute” rather than have the audience sympathize with, oh I don’t know, her being groped at work.

But never fear, for FRANXX is all about the equal-opportunity assault! Later, our female costar Zero Two announces that “if you don’t have a partner, you can take one” right before she pounces on a flustered Hiro and licks his cheek. As with the first scene, it’s uncomfortable but isn’t framed as if that’s the intent: the camera focuses on Zero Two’s tongue, her eyes, her skirt pressed up against Hiro’s leg—in other words, on the sexual tension rather than Hiro’s discomfort.

Again, there’s always a chance FRANXX will address these elements going forward, but the direction in this premiere doesn’t indicate that it will. This is a series that wants to engage with sex and sexuality but so far doesn’t seem interested in considering the difference between healthy and unhealthy expressions of said sexuality. It’s a major concern, no question.

Compared to all that, the fanservice is downright tame and kinda fun! Zero Two goes swimming naked and catches a fish in her mouth. Hiro stumbles upon her bathing and she’s totally unfazed by it. Sure, my eyes rolled back into last week when Hiro picked up her underwear (because Reasons) and she teased him about it, but at least the scene is trying to subvert the tired “misunderstood dude gets slapped by an embarrassed naked girl” song-and-dance.

That scene also actually serves a narrative purpose, as it establishes Zero Two as the more assertive and free-spirited of the two, which is a refreshing change of pace from the tsundere archetypes that have been done to death in recent years. I’m all for stories about romantic couples where the woman takes the lead… I just don’t want “taking the lead” to involve tackling and licking someone without their consent. That’s not too much to ask, right? Right??

Nothing FRANXX is doing is new, mind you. Most mecha series are grand metaphors about cis male adolescence, many are overtly sexual, and this isn’t even the first time robots have been powered by male/female partnerships. That said, I do think it at least has the potential to engage with these old ideas in interesting ways.

The question is whether it will act on that potential or just fall into the same old patterns: ignoring queer people, framing assault as sexy or romantic, using the power of hetero love to save the world and “tame” the wild, inhuman woman (my alarm bells went off when Zero Two’s beast-mecha transformed into a pretty-lady-mecha after she kissed Hiro, is all I’m sayin’), and so on.

Personally, I’m more concerned with what I think this series will do than I am excited about what it could do, so I’m probably going to tap out here and only come back if I hear good things further down the road. If nothing I mentioned above bothers you, then FRANXX will be a fun time. If it does, though, then look elsewhere for your giant robot fix. This premiere will only leave you feeling vaguely irritated.

Dee is the Managing Editor at AniFem. When she isn't vanquishing passive sentences and rescuing Oxford commas, she spends her free time devouring novels and comics, watching far too much anime, and cheering very loudly for the Kansas Jayhawks. You can read more of her work at The Josei Next Door or hang out with her on Twitter @joseinextdoor.