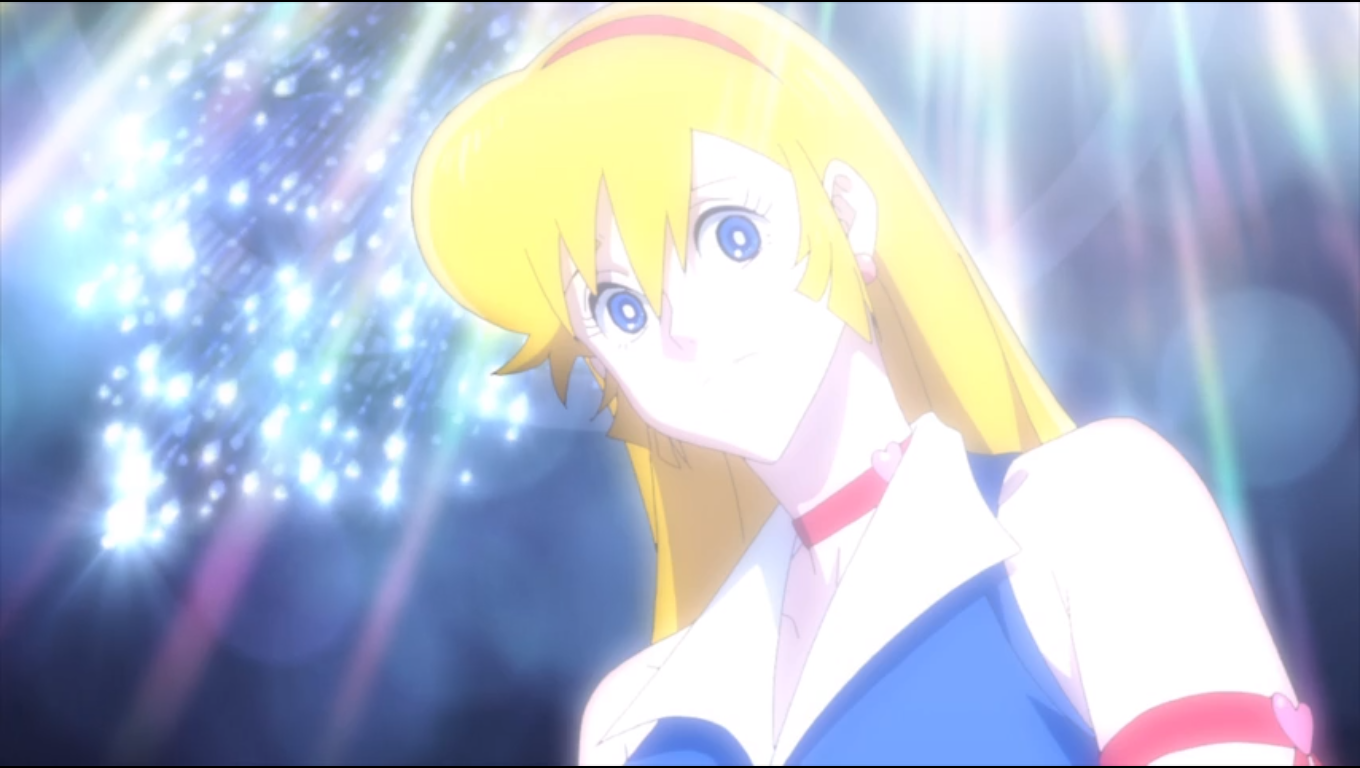 What’s it about? Honey Kisaragi is a high schooler who transforms into the superhero Cutie Honey in order to fight Panther Claw, the evil organization that killed her father.

Cutie Honey is yet another in the line of classic ’70s anime getting new adaptations this year. Originally written by Go Nagai, the creator of Devilman (…yeah), Cutie Honey has been credited as the first shounen series to star a female protagonist and is an early example of the magical girl genre, as well as less-savory influences like the “clothes ripping in battle” trope. It’s a huge franchise with live-action films, both shounen and shoujo anime adaptations, and a recent OVA directed by Hideaki Anno. It’s one of those classics I’ve always wanted to check out… and I don’t think this was the way to do it.

It throws you into the deep end right off the bat, for starters. More than any anniversary project this season, it seems to assume a base familiarity with the franchise. I had to do some googling to even find out that Honey’s father had been murdered, as he’s mentioned in passing but not explained. It’s a bizarre tack to take given that there hasn’t been a full-length series since the ’90s, though it’s not so deep that you won’t be able to follow along.

There are some extremely silly, enjoyable elements in this episode. The opening song is catchy and the animation goofy, with the pretty blatant fanservice feeling sort of cheesy and playful rather than skeevy (I lost it right around the sexy dinosaur woman doing an exaggerated pinup pose). I probably watched that OP six times before getting down to the business of the actual episode.

Then the opening minutes revealed that this version of Honey is a high schooler (something that varies by adaptation), and it was all kind of downhill from there.

Cutie Honey has always been a heavily fanservice-based anime—one of the earliest, if not the first. That’s going to be a given on some level with every version of the story, but the knowing playfulness of the opening doesn’t feel present in the actual content of the episode.

Battle-damaged clothing does indeed make a return, with Honey almost naked by the end of the climactic fight. Having nude transformation sequences and ridiculous costumes is one level of eye-rolling, but the torn clothing bits use pretty blatant assault imagery, made more uncomfortable by having Honey blush or framing the shot so that her butt cheeks are practically shoved into the camera. That crosses a line from silly fanservice to honest discomfort.

I had also heard through the grapevine that the Cutie Honey franchise is pretty darn gay, and that’s true—in a roundabout way. It might be more accurate, for this version, to say that everyone around Honey seems to have the hots for her, while Honey herself is played as frustratingly oblivious.

This premiere doesn’t shy away from showing how many ladies would like to smooch Honey, but the problem is that it also seems to think this is hilarious. Before Honey is called in on a case, she and her friend catch sight of two of their teachers banging in the bushes (don’t ask, that’s the best context I’ve got); this is a grand joke because they’re old and one of them is (GASP) fat. You can just hear the writing nudging you, saying “Fat women having sex, can you just imagine?” (One of them is named the equivalent of “Fido,” for fuck’s sake.)

On her way to the scene of the crime, Honey also charms her way past an extremely butch gang of schoolgirls. This is also hilarious because they appear to be mannish, and Honey promises to “play with them” later before merrily skipping off as a pure soul who implicitly has no idea that she’s in a den of lesbians.

She’s equally oblivious when things are played for titillation, coming home at the end of the episode to see that her roommate has been stripped and tied up by a teacher (HELLO YES THIS IS HORRIFYING) and… proceeds to tickle her in the most “nothing untoward going on here!” manner I’ve ever seen.

Even the implicit hero/enemy attraction between Honey and the main villain, Sister Jill (who disguises herself as a police officer), has the added uncomfortable element that, again, Honey is a teenager here. Even if we assume Honey might return Sister Jill’s feelings (rather than this being yet another case of “queerness = deviancy”), the fact that Honey is a minor irrevocably taints the confusion and sexual tension at the core of their dynamic.

Basically, the premiere continually offered things I might have potentially liked—great monster designs (this is Nagai, after all), a silly enemy named like “Breast Claw,” lots of gay, hero/villain chemistry—only to poison them with a seedy or mean-spirited decision.

This episode has definitely inspired me to check out the Re: Cutie Honey OVA, a version that ages Honey up into an adult office temp and allegedly features more sincere yuri. But Universe and I are done.