Since her debut over 20 years ago with I.O.N., Tanemura Arina‘s name has been synonymous with shoujo manga. Her work, published primarily in Ribon magazine, is known for its elaborate linework and use of magical girls and idol singers. Her stories often touch on more mature themes such as mortality and trauma, while still remaining appealing and accessible to younger audiences. Two of these series, Phantom Thief Jeanne and Full Moon O Sagashite, have been adapted into anime.

In 2011, she broke off her relationship with Ribon to work as a freelance artist, allowing herself more creative freedom and standalone illustration work. She is also active in the doujinshi scene and frequently draws fanart of other series such as Sailor Moon and Cross Ange. AniFem staffer Caitlin Moore sat down with her at AnimeFest this past summer to talk about her past and current projects.

AF: How has shoujo manga changed since you started your career?

AT: When I first debuted, the shoujo manga that was popular at that time had a very soft and flowy type of artwork. When I debuted, my art… the line-forms were thicker, I guess harsher, and a bit harder and more solid looking style.

AF: Has the process of making manga changed for you since you ended your exclusivity with Ribon?

AT: I feel more free at this point because I’m receiving more offers for work, not just with manga, but also for illustrations and character designs. I’m getting to do a wider variety of work.

AF: What messages do you hope to send to girls and young women with your stories?

AT: I don’t have a particular message that I want to convey to young women. I would like for everyone who read my works to feel a sense of personal enjoyment.

AF: What do you think are the unique strengths of shoujo manga compared to say, shounen or seinen or josei?

AT: The level of emotion that you’re able to express. The weaknesses are also the difference that you can show in different genres.

AF: How does editorial input affect your work? Do you have, say, strict editors?

AT: It’s not so much that I have strict or harsh editors. It’s more that they have unexpected input like, “I want this more adult-like, more womanly. Can we get more seductive?” I’m like, “Oh… okay… That’s different.” *laughs* I try to meet the expectations but there’s only so much I can do. I’ll reach to here and say, “Okay, that’s it, but I’ll try more if I can.”

AT: Idol Dreams has a childlike transformation, but since they still want to be appealing to the older generation of fans they tried not to make it too childish, so it’ll be more seductive in that sense. But they also can’t have too many battle scenes because that’s not appealing to the girl side, so they try to make it more interesting and keep the clothes cute and fashionable and still engaging to the readers.

AT: For idol singers, they’re really easy to draw because all they have is a mic, so they would just sing. *laughs* But I also have more freedom to design their costumes and their fashion, as opposed to other musicians who have to play instruments and do more stuff… They’re a bit too complicated. So I just wanted to draw idol singers.

AF: You’ve done doujinshi for Sailor Moon and Madoka Magica. What draws you to magical girl in particular?

AF: You’ve also done fanart for Cross Ange, which is very different from the sort of stories that you tell. What about that series do you particularly enjoy?

AT: In the beginning, my editor and my staff were very into Gundam Seed and they wanted to create something similar to that, where they have a very strong, passionate protagonist but still a woman that can have those attributes and draw people in. Also, including this, they wanted to do something that can draw people in, really pull them into the story and have them wonder, “What’s happening next? What’s happening next?” That kind of potential story.

AF: Many of your side projects and doujinshi have all male casts. Have you thought about making a manga with all male protagonists? Why or why not?

AF: When I was in school, I had a lot of friends who liked Takuto from Full Moon. He was very popular.

AT: He’s also very popular in Japan. Usually my characters are all girls, and usually everyone really likes my girls but not so much my male characters. Takuto was the first male character who got so popular, he overcame one of the places of the girl characters.

AF: When did you make your debut?

AF: I really like 90’s shoujo manga. What kind of manga that was coming out then did you enjoy reading?

AT: Revolutionary Girl Utena. That was right around when I made my debut.

AF: Oh, that’s one of my favorite anime ever!

AT: It’s also my favorite anime.

AF: Do you think what the trends were at the time influenced your storytelling?

AT: I wasn’t influenced so much about what was coming out around that time. It’s more like my childhood series like Tokimeki Tonight or Chibi Maruko-chan. The gag and comedy types were more influential in my work.

AF: Do you think the kinds of stories that are being told in shoujo manga have changed since around that time?

AT: I don’t think it’s really changed that much since when I debuted. Even though it hasn’t really changed much in Japan… Instead of fantasy and magical girl stories, it’s more real life type of stories now. It’s getting more popular now, not just in movies but also in shoujo manga.

The framework of “[cis character] must pretend to be [“opposite” gender] before restoring their [femininity or masculinity]” invites biological determinism by making the plot’s stakes dependent on the successful concealment of the main character’s “true” (here, meaning “assigned-at-birth”) gender. The idea of a “true” biological gender is itself a transphobic trope that does harm to the gender-nonconforming communities that genderbending manga purports to represent. 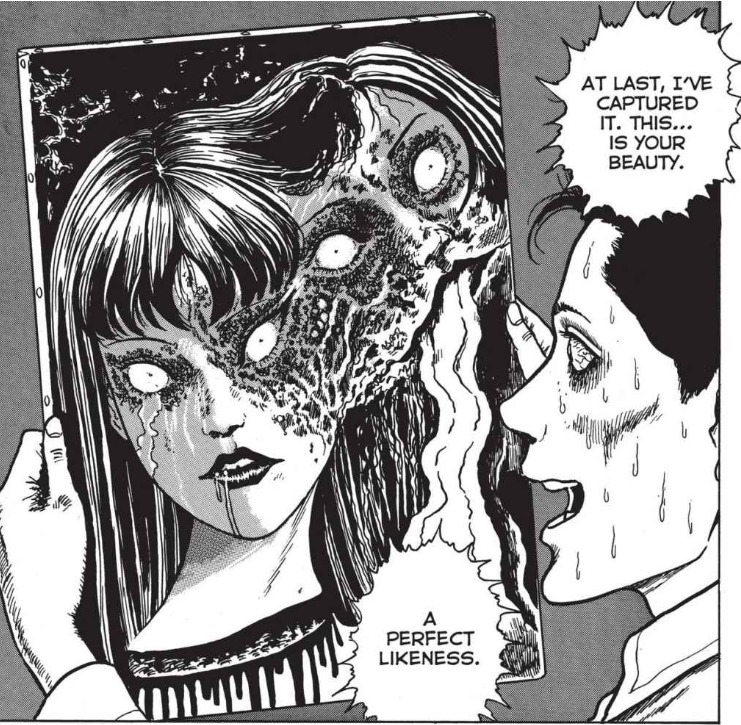 Demonesses and the Men Who Abuse Them: The real tragedy of Junji Ito’s Tomie

Tomie is just one version of a story we’ve heard about women over and over. She is the succubus whose beauty drains men of their life and the siren who compels sailors to throw themselves into the ocean. The cruel, conniving woman who “gets what she deserves” after her manipulation of a man blows up in her face. This is how the stories justify and disguise their displays of male misogynistic violence: as uncontrollable supernatural urges in response to an unknowable, distinctly female evil.