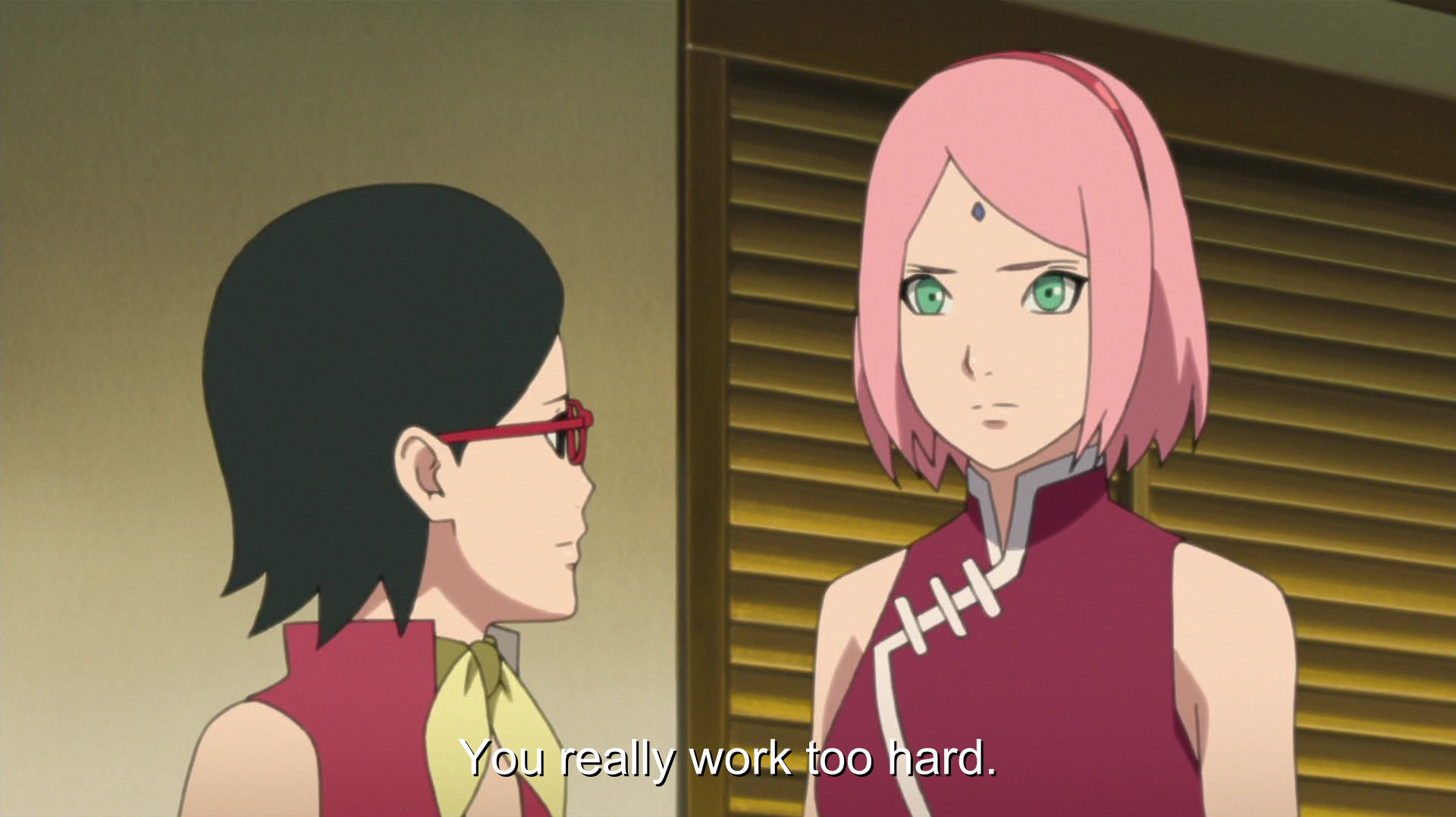 What happens to shounen action heroes when they grow up? How should a hero and his friends live after getting everything they ever wanted? Boruto: Naruto Next Generations looks at the lives of its heroes as adults raising families, depicting them as falling along traditional gender lines.

Most of the young female cast are stay-at-home mothers, with only one still working as a ninja. Naruto himself hasn’t fared much better; he now spends his waking life working, with almost no time to see his family or unwind. Their lives reflect conditions that many people, including Japanese citizens, struggle with.

Large segments of Japan’s work culture are hostile to working mothers. In 2013, 70% of Japanese women gave up work when they had their first child. There are many complex reasons for this. One is that professionals are expected to work extremely long hours and this is incompatible with caring for children. Japanese men also do not pull their weight when it comes to housework. As noted in the previously linked article:

In Sweden, Germany and the US husbands spend, on average, three hours a day helping out with children and household chores. In Japan it’s one hour, and they spend just 15 minutes a day with their children.

The expectation that mothers will stay home has led to a lack of daycare centers, and those that exist have long waiting lists.

Women also cope with societal pressures if they wish to continue working. In traditionalist areas, it is expected that once you become a mother, your “job” is to care for the home. Working women must choose whether to carry on in their careers, or to set aside their accomplishments in order to care for their families. This decision is made harder when working mothers are shamed for not putting their children first.

Most of Naruto’s female characters adhere to these expectations by becoming stay-at-home mothers. Ino and Hinata are rarely seen outside of their homes. Tenten, who doesn’t have a family, is a career-focused woman and (possibly coincidentally) is almost entirely missing from the anime until the Chunin Exam arc, around sixty episodes in.

Temari’s situation is much the same as Ino and Hinata’s. In one episode, Temari was actually allowed outside to fight a gang of thieves who were raiding the village. However, the script made sure to emphasize that she had made her family’s dinners before she left.

Why wouldn’t she? There may be a gang of dangerous thieves on the loose, but there are dinners for men that need making. By emphasising this point, Boruto is unconsciously asserting that a wife’s main duty is to care for her husband and children, even when innocent lives are at stake.

Sakura, meanwhile, is a single working mother, because her husband Sasuke is a deadbeat father who wouldn’t understand paternal responsibility if it bit his leg off. She excuses her husband not being able to visit his family because he’s doing important work defending the village. Sadly, her daughter Sarada never follows this up by asking why this takes twenty-four hours of his time, seven days a week, during the longest period of peace known in the land.

Sakura being left to raise Sarada whilst Sasuke is off doing whatever it is he does puts unfair expectations on her. She is a warrior who is now expected to complete all the housework and childcare, all whilst working full time.

To Boruto’s credit, the show does demonstrate some of the pressures this life exerts. For example, Sakura accidentally destroys her house on one occasion when the frustration overcomes her.

The women’s techniques have been all but lost. In one episode, Inojin is having trouble with his beast scroll techniques and he sulks for an episode. He announces that he’s going to learn Ino’s mind transfer technique instead. The show treats this idea as ridiculous, and he’s back to using his dad’s Beast Scroll by the end of the episode.

Ino’s mind transfer technique isn’t considered a legitimate skill in its own right. The show treats it as a backup, something to be considered only when the techniques passed down from men have become inconvenient. The show treats Ino’s life’s work as contemptible and dismissable unless it’s the only available option.

Boruto also depicts Japanese work culture uncritically. In Japan, around 12% of employees work more than a hundred hours overtime a month and nearly a quarter of all employees work around 80 hours of overtime. In theory, they work from 9:00 AM to 5:30 PM, but workplace culture dictates that it’s rude to leave before the boss. The bosses themselves don’t want to leave on time because it looks like they’re not working hard enough—perpetuating a vicious cycle where everyone is working unhealthily long hours.

This all leads to professionals being disconnected from their families and having problems with fatigue, overdoses of prescription medications, and even suicide. They even have a legal term for death by overwork: “karoshi.”

Naruto, no longer the boisterous adolescent of Naruto Shippuden, experiences the oppressive expectations of Japanese working culture in Boruto. Naruto is the Hokage—the leader of the village. It’s everything he has ever wanted. But now, every time we see him in his office, he’s surrounded by massive stacks of paper. He has so much work to do that he creates shadow clones to carry out large parts of it. He rarely sees Hinata, let alone his children.

The patriarchal society normalized by Boruto dictates that fulfillment for a man must come through his work. Naruto is almost as trapped by this system as Hinata is. The societal pressure to conform to gender roles has led to both characters being unable to find happiness outside strict areas. For Naruto, it’s work; for Hinata, it’s childcare and housework. The show never considers maintaining a balance between the two areas.

Boruto demonstrates the consequences of this extreme work culture by causing beloved characters to suffer: Temari, Ino, and Hinata’s ninja techniques are lost, along with their careers. Naruto has achieved his dream… but he never gets to see his family. This would be unfortunate if these elements were purely fictional, but sadly, for many professionals across the country, they are all too real.

Boruto: Naruto Next Generations is aimed at the shounen demographic: boys between the ages of 13 and 17.  Presenting these ideas with the bare minimum of commentary to teenagers re-enforces damaging attitudes to gender. Nor is it alone, as other influential shounen series such as Dragonball Z have given their female casts the same treatment. Media has the power to shape reality. If equality is ever to be achieved, popular series like Boruto need to do better.

Michael Coolwood writes Science Fiction novels with a sense of humor. You can find his books on his website, Coolwood Books.