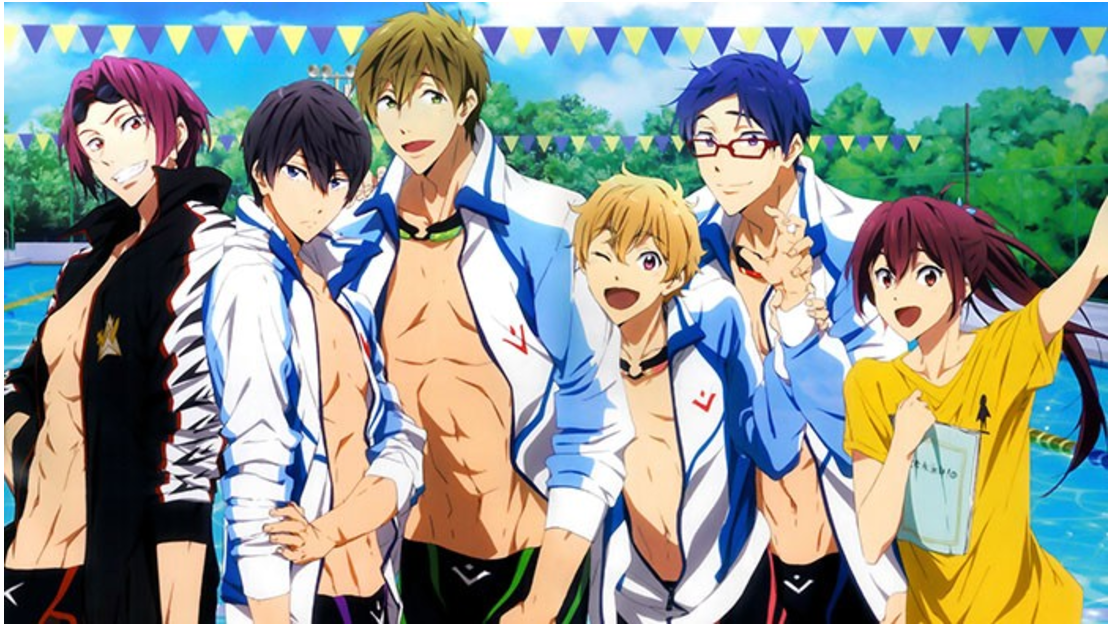 I thought I knew what I was getting into when I saw the cover art for Free!, given that it features an assortment of scantily clad young men standing very close to one another, abs on display like muffins in a bakery. I soon discovered that was only the start of the fanservice, as I found myself on a wild emotional ride that convinced me that when it comes to creating fanservice for girls, it’s not simply a matter of reversing panty flashes into brief glimpses of, well, briefs. Watching Free! with my husband, sister, and niece showed me that this show’s effort to appeal to the ladies led to an audience performance far deeper than the shallow side of the swimming pool.

It all started when my 14-year-old niece Marie recommended Free! to me. Now, she’s a pretty cool chick—she wears Harry Potter T-shirts and knows what a Dalek is—so I usually take her advice when it comes to nerd culture and anime. After I’d watched an episode or two, I sent her an amused text message that said “IT’S JUST BOYS TAKING THEIR CLOTHES OFF.”

Not so, she replied:

AND TWO CHARACTERS ARE TOTALLY IN LOVE

It’s clear Marie felt very strongly about the emotional overtones of the show, whereas I was too distracted by the fanservice to notice. This exchange got me thinking about the intended audience of Free! and the experience they have watching the show.

Most of the anime I had watched at that point had definitely been created with a straight male audience in mind, and I’d learned to enjoy the fanservice I liked and take the stuff I didn’t like in stride. But Free! is different; it appears to be made for young female viewers.

In case you haven’t seen the show, the premise of Free! is pretty simple: A close-knit group of boys competed together in swim meets as children, going so far as to win the medley relay. Then one of the most talented members moves to Australia to swim competitively and the old team falls apart. Fast forward to high school, and the band is (mostly) back together again. Throw in two token female characters (a goofy teacher and a breathless teenage girl) to support the team, and you have all the makings of an anime in which, according to my husband at least, nothing really happens.

You can’t blame my husband, who may be less attuned to the subtle, inward character development of a teen anime boy than I appear to be. From my perspective, a lot happens in Free!—but most of it is on an emotional level.

Haru muses endlessly about the power swimming has over him, his resistance to the idea of swimming any stroke other than freestyle, and his constant desire to be, well, free. He’s torn over his broken friendship with Rin, confused about how a friendly competition devolved into a bitter rivalry. The other boys each face their own inner demons, from fear of the ocean to an obsession with mathematics and physical symmetry, which actually gets in the way of good swimming.

We witness Haru and Rin’s angst through the perspective of Rin’s teenage sister, Gou. She’s the ultimate stand-in for the audience, never developing a romantic attachment to any of the guys but definitely enjoying their rippled sinews every time they take off their clothes. The makers of Free! are marketing this anime in a very specific way to a very specific audience. The boys and their torsos are on display for a purpose here: To please the teenage female gaze.

It’s important to note here that not all women are deeply enthralled by the sight of a scantily clad male body. Plenty of audiences avoid fanservice of all types, and the term “female gaze” is even problematic in assuming that all women want to gaze at the same thing (we don’t). However, in my opinion, for straight female fans, male abdominal muscles are the fanservice equivalent to barely covered breasts. Still, as you can tell from my niece’s defense of the show, there’s more at play here than what the creators thought would visually titillate their viewers.

Historically, fanservice in anime (and in other forms of entertainment) usually exists to serve the perceived desires of a certain audience: a straight male one. That’s why exposed, bouncing breasts are so common even in anime where exposed bouncing breasts really have no place. Think Lady Tsunade on Naruto. She is a freaking ninja. Why doesn’t her top support her breasts? That can’t be comfortable for her.

But Free! is different from many other shows out there. “What do girls want?” the show seems to ask. And the answer is two-fold: boys in bathing suits, and boys having feelings and spending lots of time talking about their feelings. That’s the takeaway from my short conversation with my niece. She enjoyed the Speedo-clad boys to some degree, but in her words the reason the show is good is that “IT GETS EMOTIONAL.” So emotional, apparently, as to warrant the all-caps.

Is emotional fan service more admirable than physical fanservice? What does its prevalence in anime marketed to girls say about young women and the people tasked with creating content for them?

True, you can’t really argue that a scene in which boys breathlessly reveal their tragic swimming-related pasts to one another is the same as the scene in which they must huddle together for warmth in a storm, their washboard abs trembling in unison. Both scenes are pure fantasy, though. Both scenes are played up not to depict the complex relationships teenage boys have with themselves and each other, but to serve the unironic fantasies of the young, straight, female viewer.

Free! is mostly just scantily clad boys running around and diving into random bodies of water, and don’t get me wrong: The animation team embraces that part of the show, drawing midsections so cut they look like husked ears of corn. But there’s more to this fanservice than just idealized caricatures of human bodies. There’s an element of projecting complex emotions and personal strife onto characters unlikely to express those feelings.

The girls who enjoy shows like Free! don’t just enjoy seeing boys talk about their emotions for the heck of it. They can see themselves in these characters. They can connect to them and relate to them in a way that actually validates their own feelings and experiences.

Free! plays out similarly to an otome game, a dating sim for women where no romantic choices are fixed enough to prevent the players from inserting themselves into the story and choosing their favorite from among the boys. The viewer is the invisible character in the show, just as the main character in an otome game is a placeholder for the player.

Fanservice marketed to men occasionally plays out this way as well, where the male protagonist is bland enough for a male viewer to ignore them so he can enjoy the beauties on parade (think the pedestrian everyman in Monster Musume). Often, though, fanservice is inserted into shows which otherwise feature compelling characters and storylines.

Sometimes it’s artfully done, as in the subtle sexiness of Asuna holding a sheet over her naked body in Sword Art Online (although it’s worth noting that in this scene it’s heavily implied they just had sex, and yet somehow the male protagonist Kirito is neither in the bed nor undressed). Sometimes it’s embarrassing, like Hestia and Loki fighting over boob size in Is it Wrong to Try to Pick Up Girls in a Dungeon? And other times it’s outright disturbing, like the underage dragon-girl in Dragnar Academy (uh, the less said about this one, the better).

I think anime audiences deserve more high-quality shows that better represent who they are and what they want to see. This is not a one-size-fits-all market. People who enjoy anime come from as diverse a background as any group, and I believe audiences will (and often do) respond well to shows that step outside of the old formulas.

The good news is that this doesn’t require an entirely new brand of show. Considering the female gaze (whether cishet or queer) along with the male gaze in any anime is likely to produce shows which will appeal to male and female viewers without alienating women or pandering to straight men (who may not all be interested in the same old song and dance when it comes to fan service either). Consider the delight that is Yuri!!! on ICE, where male bodies (and feelings) are celebrated alongside an otherwise compelling and emotional sports-driven narrative.

Women enjoy sports, dragons, swordplay, and video games… or at least I do. I know there are even women who don’t object to giant fighting robots, although I’m not one of them (show me a mecha anime and I’ll show you how fast I can nap). Some women also enjoy sexy male characters in bathing suits. Perhaps if studios considered that women and girls might enjoy just as wide a variety of elements—sexy or otherwise—as men and boys do, and considered that in developing shows, there would be more series with the fanservice of Free! but more narrative heft.

I may not believe that Free! is the cream of the crop when it comes to honest and complex storytelling, but I’m glad it exists. It’s certainly not the best example of feminism at work in anime, but it does do something to balance the market by including images intended to appeal to (straight) teen girls.

In Free!, those female audience members who enjoy the show are front and center, and it’s their fantasies and desires that are being delivered. Maybe it’s a stretch to say a bevy of beautiful boys all tearfully confessing their feelings to one another would serve as empowerment for young women and girls, but it’s worth noting that in most of popular culture, younger female fans are often maligned and made fun of for their desires and enthusiasm. In fact, the representation of girls in mainstream anime often veers towards sexualization. They are the objects of desire, often in a way that would be inappropriate (if not downright criminal) in the real world.

In the fantasy of Free!, the young girl is not vulnerable; she’s respected and taken seriously. The show serves up some gorgeous dudes in tiny shorts, but it also carves out a space for girls to be free to enjoy their fantasies without being demeaned.

At this stage, we have raised enough money to be able to pay for contributed posts, behind the scenes admin, and audio editing for weekly podcasts. Our next goal is to pay the editors who have worked on AniFem as volunteers since before launch, making enormous contributions for no pay. Help us pay them for their work at a rate of $15 an hour by becoming a patron for as little as $1 a month!