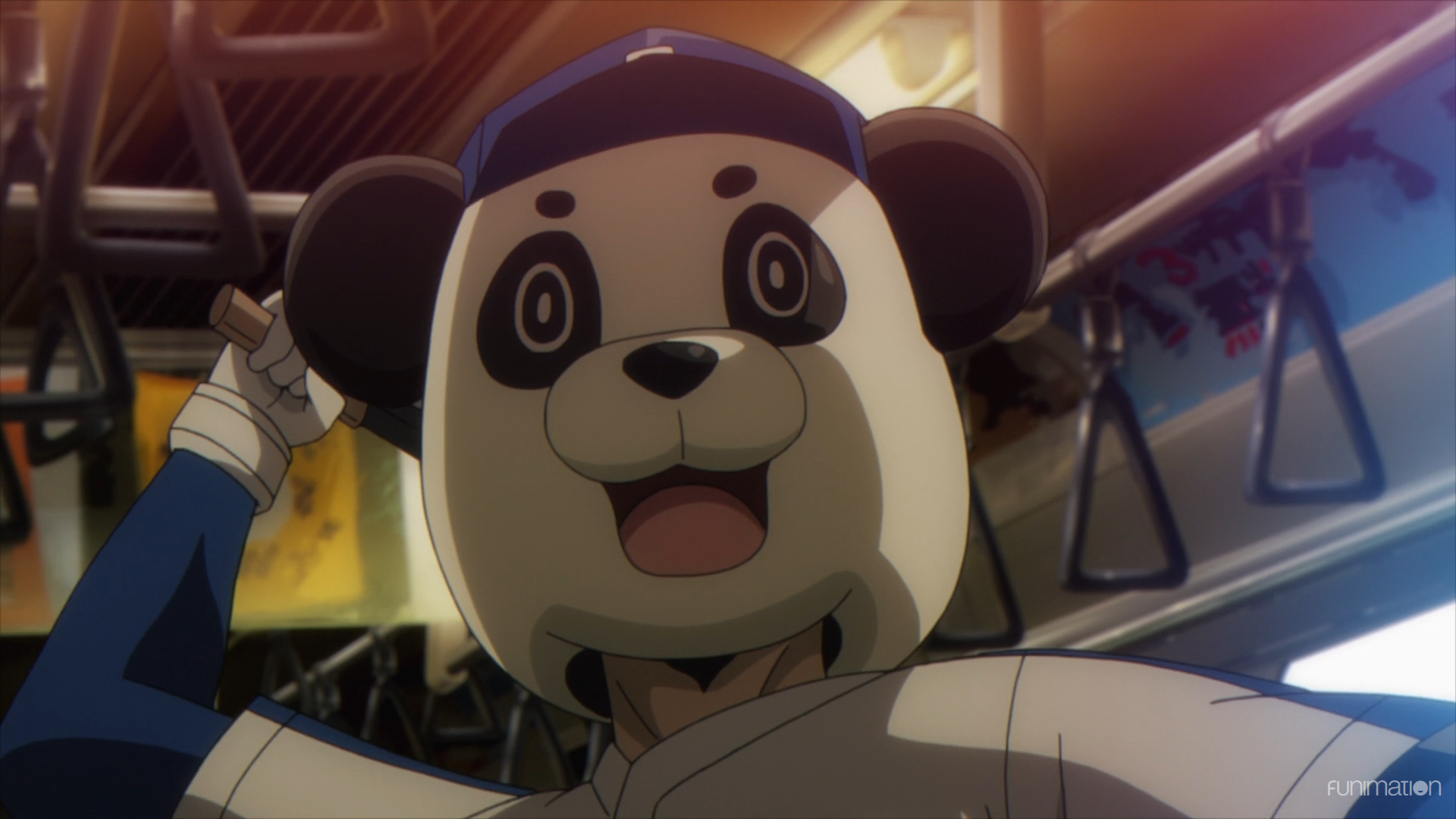 What’s it about? Sudo Kaname joins Darwin’s Game, a mysterious mobile phone game that pits players against each other in a life-or-death round of cat and mouse. Having survived the murderous onslaught of a mysterious man in a panda outfit, Kaname meets Shuka, a young girl who appears to have no qualms killing other players. As Kaname discovers he is able to materialize weapons, will he be able to fight his way back to normalcy?

Don’t you get it? If you die in the game, you die for real.

This is such an edgy show, and it really wants you to know it.

Focusing on gory visuals and surrealism, the show hits the ground running with Hamada, Kaname’s classmate, getting chased through the night by Banda-Kun, a knife-wielding man in a baseball panda mascot (a nod to the Chunichi Dragon’s mascot Doara). He exposits briefly on the Darwin’s Game for no one’s benefit aside from the audience’s before getting slashed to death.

That pretty much sets the tone for the rest of this 48-minute extended first episode wherein Kaname is plunged into the game without any real explanation of what is going on. Though the episode is twice the length, it hardly does any work to make the viewer care about anyone on screen, save for the hapless protagonist who has been embroiled in the murder spree.

The doubleheader may have softened some criticisms I would have said if the show had premiered as a normal-length episode only focusing on Banda-kun, but it still highlights how the first half of this episode has very little substance aside from blood and gore. For all the shock value the murderous mascot provides, he materially contributes little to the story. Aside from the gruesome and surreal visuals, he serves as nothing more than a MacGuffin for Kaname to join the game.

Even the deaths of his victims, whom Kaname was friends with, provides very little weight to the story because we spend so little time with them. Hamada is written off in the first few minutes, while Kyouda at least lends impetus for Kaname to keep fighting and playing the game. Even still, with hardly any time spent getting to know him, Kyouda’s death fails to elicit any sense of real loss.

Having survived his first round, Kaname moves on to meeting up with Shuka, a more experienced player who extended her help during the fight. Only then, does the show finally start piecing together its central conceit: Kaname, like all other players in Darwin’s Game, has special abilities that enable him to fend off or attack other players. By winning games, players gain “points,” which presumably can be exchanged for money or be used for in-game purchases.

In some ways, Darwin’s Game feels like it’s a warning to the addiction to “free-to-play” mobile phone games. Falling for a low barrier for entry, a snake coils around and grips its users and chokes them down one point at a time.

It is difficult, however, to see how this story pans out. Kaname openly despises the game and wishes to quit, yet he shows particularly great aptitude towards playing it. In a game where its ultimate losers will face death, it’s questionable how Kaname would be able to “win” this game without a considerable body count.

What is most jarring, however, is the final twist at the conclusion of an exhausting and violent foray into the world of Darwin’s Game. Having come to grips with his special ability to produce anything he’s touched out of thin air, Kaname subdues Shuka and forces her to surrender. As a result, Shuka promises to “obey Kaname,” and the next morning (after Kaname passes out), he wakes up naked in bed with her.

Still naked, she climbs on to the shirtless boy and asks him to “make a family with me.”

Shuka already spent much of the episode acting like a “cute sociopath” by channeling big Yuno energy from The Future Diary. The final cliffhanger ending with cheesecake felt highly out of character and out of place.

Is this going to keep happening? What exactly is Shuka supposed to be in all of this? Is she actually going to have any agency aside from info-dumping game mechanics and background on our protagonist? There are an endless number of pitfalls she can fall into ahead.

Wherever this show may go from here, it has established itself as A Lot already. For all its violence and depictions of sociopathy, it doesn’t really invite much investment in the characters aside from how “interesting” Kaname is supposed to be as a protagonist.

With so few characters that actively matter over the course of an hour, I’m hard-pressed to find a reason to keep putting in an effort to watch this.

Chiaki Hirai is a writer and freelance translator working out of San Francisco. Her personal accomplishments include: writing an undergraduate thesis on Touhou Project, getting blacklisted by TokyoPop, and interviewing the creator of Sudoku. In her free time she screams about her kinks and urban development on her twitter.