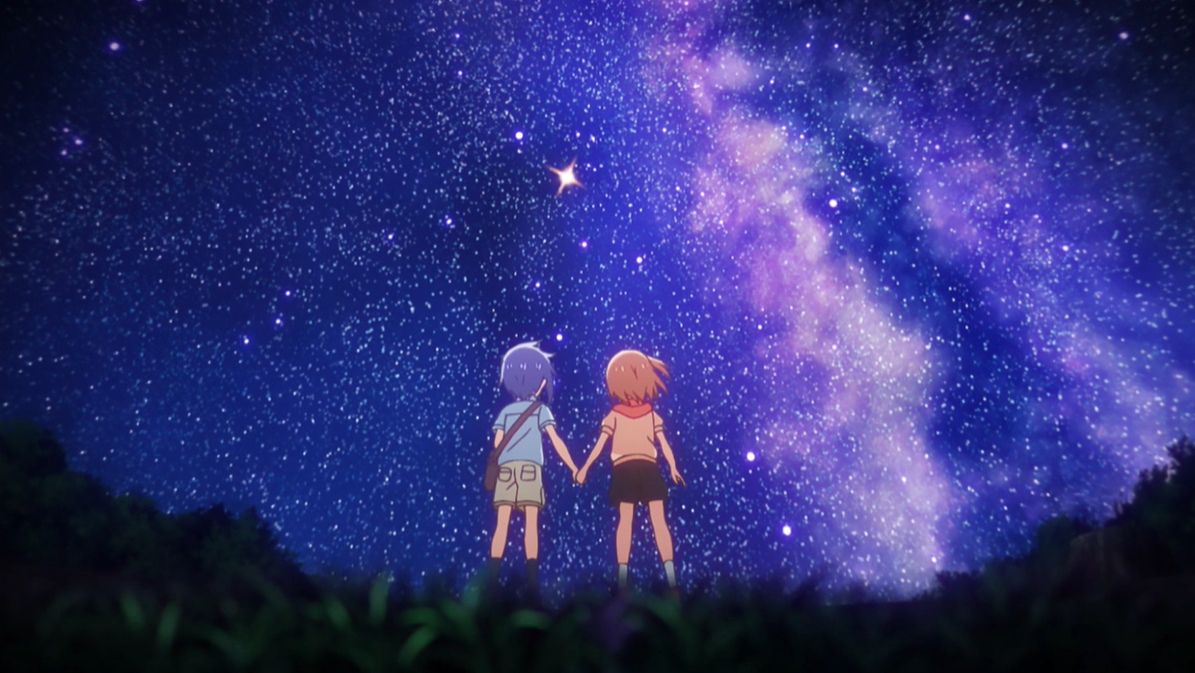 What’s it about? Ever since a fateful childhood meeting with a boy named Ao, Mira has been determined to join the astronomy club and discover an asteroid. But her first day of high school brings two surprises: first, the astronomy club has been merged with the geology club; and second, Ao is a girl!

Hey, I get to review a Doga Kobo series that doesn’t make me want to dig out my eyeballs out with a headphone jack! This decade is full of surprises.

While once the studio of AniFem’s comedy of the decade, Monthly Girls’ Nozaki-kun, Doga Kobo’s output over the past year or so has mostly starred prepubescent girls and the adults who find them attractive. Compared to those, Asteroid in Love is a light spring rain.

The studio’s visuals are as good-looking as ever, and there’s no overt fanservice to speak of or pedophiles lurking in the wings. But that’s a new low even in the spacious cavern where I’ve been keeping my bar, and I’d be lying if I said I wasn’t left a touch underwhelmed by this premiere.

It must be said that as a hobby anime—which the show seemingly purports to be, given the prominence of magnifying glasses and star charts in the opening—Asteroid doesn’t do a great job of drawing audiences in to its twin subjects. Characters toss off names of stars and rocks, give longitudes and draw maps, but it’s more scene-setting than anything. Color commentary.

Compared to a series like Laid-Back Camp, which excelled at conveying the cozy appeal of an inherently undesirable subject (camping. On the ground. In the winter.) from the very first episode and inspiring a desire to know more, there’s just not much passion in evidence. All the best hobby shows radiate this same love for their extremely specific subjects, but outside of its cold open, Asteroid wears its star-theming like a hat.

The show seems far more interested in the club as a stage for Cute Girl Antics, which wind up feeling forced rather than stemming naturally from an interest in the material—and in a genre known for working with fairly stock archetypes, that’s saying something. It’s not even that the club members are particularly unlikable, so much that the script is too busy insisting that they all have pwecious quirks to let them come across authentically.

The main staying power here is the show’s potential as yuri. At the very least, the reveal of Ao’s gender eschews any “but we’re both girls!” talk and settles comfortably into some cute bits of texting awkwardness that are easily the highlight of the episode. Ao and Mira don’t have electric chemistry, but they are sweet, and enough to pull me back for at least a three-episode try… even if I am preemptively gritting my teeth at Mira’s creepy possessiveness-as-comedy childhood friend Suzu.

I’m treating this with an extra dollop of suspicion given the studio’s recent history, but if the show can give its hobby elements a bit more space to grow and let Ao and Mira’s relationship develop rather than stagnating, this could be a sweet little show.

Editor’s Note: this article was edited after publication because Vrai mixed up “astronomy” and “astrology” again