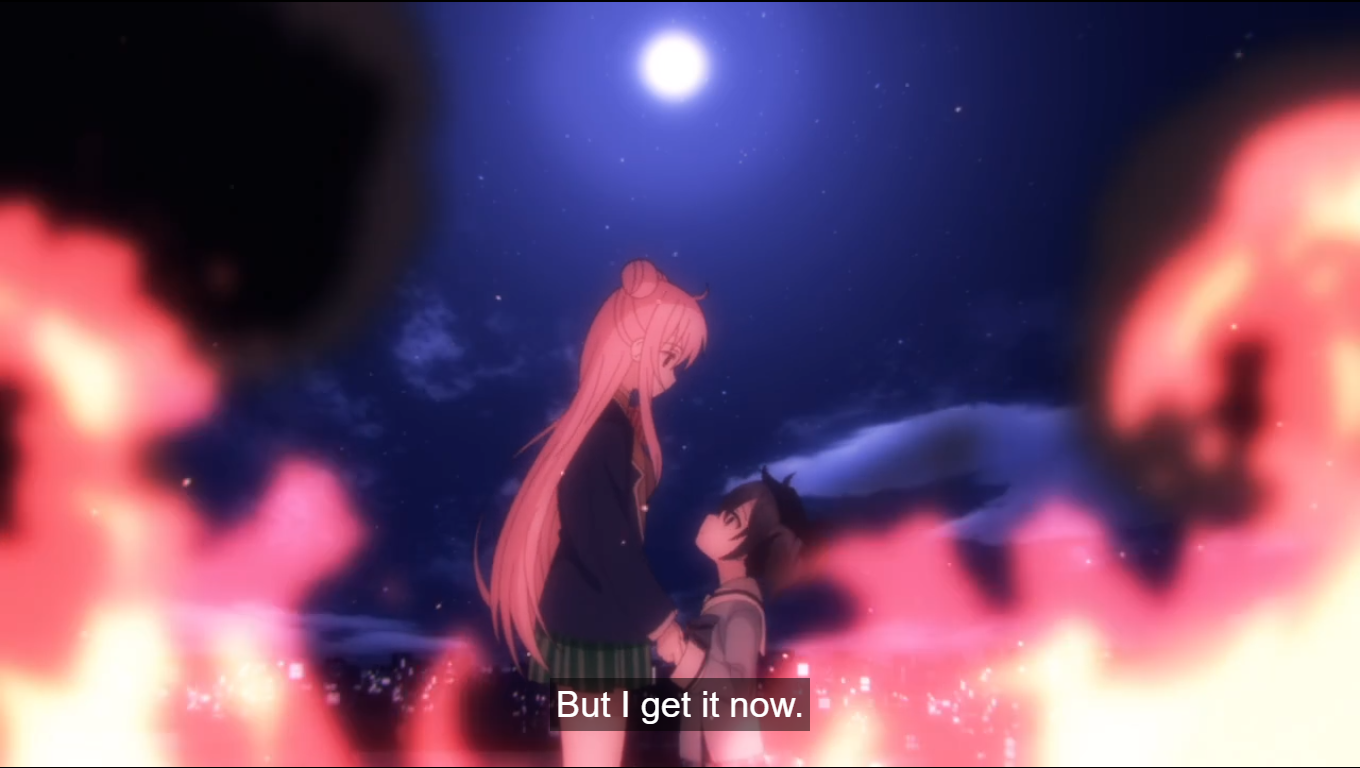 What’s it about? Satou has never loved anyone before, until the day she meets sweet grade schooler Shio-chan and takes her home. Now Shio has become Satou’s one source of happiness, keeping her dark thoughts and violent impulses at bay. But apartments don’t pay for themselves, and the longer Satou is away, the more her veneer begins to crack.

We’ve entered what I like to call the “shame shadow” of premiere season. All the shiny new premieres that the creators are proud of (some with more cause than others) have made their debuts and then some, viewers have picked their faves to follow for the season… and so the last few musty mistakes come dragging across the finish line, quietly hoping nobody notices the trail of slime in their wake. Yesterday, Dee reviewed a forced-alcohol-humiliation-and-incest charmer, and today I’ve got Happy Sugar Life.

I so badly wanted this anime to be good. In fact, I think a lot of people were excited about it, because the general buzz talked it up as a trashy but fun “be gay, do crime” sort of yuri show and left out one crucial fact: that the “love interest” is a grade schooler.

“But it’s a horror story! It’s supposed to be messed up!” I can hear a few concern trolls out there already, so let me take a minute and address the obvious. It’s my last review of the season. I’ve got time.

Listen, I know horror about fucked up, codependent relationships. Whether it’s the mutually assured destruction of Dead Ringers, the surprisingly effective queasiness of Killing Stalking’s first season (before it fell into the trap of just romanticizing the thing), or the hyperreal gothic romance of Hannibal (and its anime Satan-Fell-in-Love cousin, DEVILMAN crybaby), this stuff is my bread and butter.

And believe you me, there is a trick to portraying these kinds of stories in a way that’s meant to clue the audience in—incongruous behaviors that don’t line up with the captor’s worldview, sickly color palettes, outside indicators of how this is slowly, corrosively harmful even if the character(s) don’t realize it. Happy Sugar Life has not grasped the efficacy of these tools.

Or, rather, it knows they exist, but the things it’s choosing to emphasize as horrifying throw the show’s priorities into sharp relief real quick.

The episode has plenty of tilted angles, unsettling music and ominous sound effects for the moments hinting at Satou’s repressed yandere side. It has lots of sickly colors when Satou stands up to her manager and points out that the woman raped her teenage employee (which gets the tiniest of golf-claps for the surprisingly rare acknowledgement that women raping men is a horrible thing). And there’s the foreshadowing that all is not as it seems when a woman puts up missing person posters for Shio at episode’s end.

But absolutely none of that touches on the rotten little core at the center of this story: a high schooler is grooming a prepubescent child, referring to her as “beloved,” and encouraging talk about marriage vows. There is not a drop of awareness that this is a skin-crawlingly awful thing. Rather, the show unremittingly frames Shio and the apartment the two share in warm, pastel lighting—as Satou’s only safe haven from a world that’s been cruel to her and forced her to do awful things.

In fact, the opening goes out of its way to frame this as a tragic love snuffed out by the circumstances of the world, as the pair jump from a roof while wearing what look an awful lot like wedding rings. But I can see how the show forgot to frame these things in a horrifying light. They were just so awfully busy working on a near-upskirt shot of the girl who probably hasn’t lost all her baby teeth yet.

Listen. There is a time and a place for fiction to explore taboo themes and ideas for the sake of artistic transgression. That time is not, nor is it ever, when those themes are prominently linked to prejudices still actively being used to oppress marginalized groups.

In America, recent legislation has been introduced making it legal to ban same-sex couples from adopting children. In Japan, sexual minorities haven’t achieved that legal milestone at all. And part of the reason for that is the persistent and poisonous idea, showcased in propaganda and then adopted into fiction as a matter of course, that queerness is linked with pedophilia.

The conflation of those issues is a cornerstone of arguments that would deny the queer community rights, and it’s fucking detestable to see it continue to crop up in fiction. Banana Fish had the thin (though not sufficient) excuse of the source material coming from the 1980s. Happy Sugar Life started serialization in 2015. The very real threat to an entire group’s life and rights—my rights—is not an acceptable sacrifice to someone’s tissue fodder.

Sorry, readers. I meant for this review to be funnier, but then I read the news, and. Y’know. Choking fumes of a national dumpster fire and all that. Anyway, don’t watch this show. Use that free time to go punch a Nazi instead. Maybe watch Flip Flappers or Utena or something. Pet a puppy.

Oh, and here’s a fun fact: I didn’t even get into Satou fat-shaming her coworker (who is not, as you might expect, fat) or the fact that the rapist manager’s motivation is that she’s aging and people are paying attention to the younger, cuter Satou instead. So don’t worry, this is a maggoty corpse of a show all the way down.