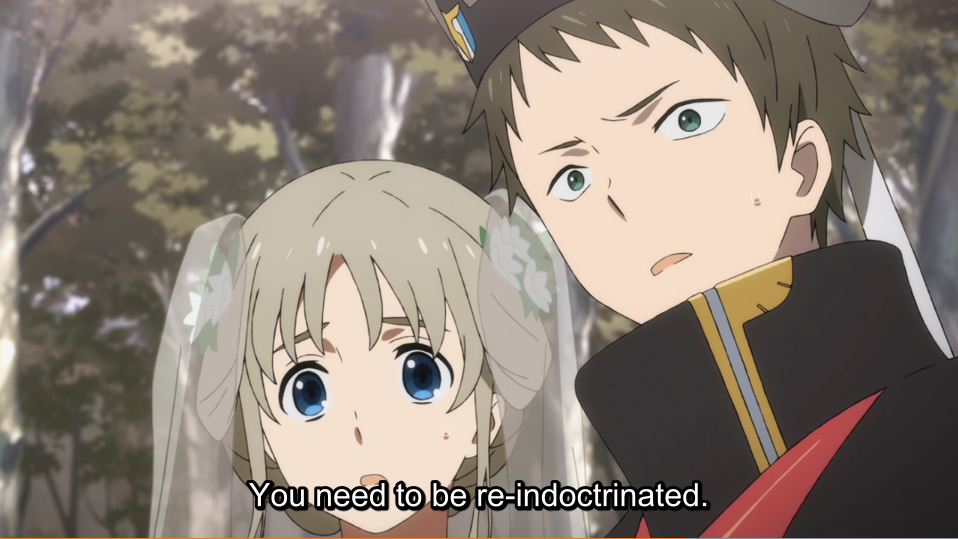 DARLING in the FRANXX has the dubious distinction of being one of the most discussed, discourse-heavy shows of 2018 so far. It wasn’t polite discussion, either—fans across social media battled it out over perceived messages about gender roles, while others demanded that feminist fans stop inserting politics into anime.

Things only grew more acrimonious as the plot wore on and the topic of procreation became central to the story. Many fans continued to insist it was just supposed to be an interesting plot, but the fact is, no art is apolitical.

All art, from cookie-cutter crime dramas to Nobel prize-winning novels, reflects the views and mores of its creators and the culture they grew up in. Whether it was intentional or not, DARLING in the FRANXX touches on one of Japan’s current political hot topics: the role of family and childbirth.

A few weeks ago, Japanese lawmaker Mio Sugita stirred up international controversy when, on-camera, she chuckled about queer Japanese youth attempting suicide. She said that, since same-sex couples don’t reproduce, they are “unproductive” and not worth taxpayer money.

Her remarks sparked outrage, and thousands came to protest on the doorstep of the ruling Liberal Democratic Party’s headquarters. Although the LDP has disavowed her comments, other members have said similar things before.

While Sugita’s outrageous comments do not reflect the majority of Japanese people, her callousness toward men and women who don’t prioritize child-rearing reflects the nation’s longtime struggle with its declining birthrate. As people continue to have fewer children, politicians have been scrambling for ways to bring the numbers back up to the replacement rate.

There are complex social, cultural, and economic reasons why people in Japan are having fewer children. But rather than address those, most Japanese politicians have turned to a strategy that remains popular the world over: shaming women and other marginalized groups.

In June 2018, the LDP’s secretary general, Toshihiro Nakai, said childless couples were “selfish.” Only a month before that, another LDP politician said that newlyweds should focus on having “three or more” children, and that single women are “letting the country down.” Another stated that women, rather than men, should be in charge of caring for children. Meanwhile, women who take maternity leave, especially politicians, face maternity harassment.

DARLING in the FRANXX (or DarliFra for short) sprang out of this political environment. Months ago, I wrote about the misgivings I had about the gender essentialism and normalization appearing in the show’s scripts. Still, I recognized there was still a chance for the show to do something interesting.

As the series went on, though, it became increasingly clear that DarliFra, intentionally or unintentionally, was pushing a view that privileged the traditional nuclear family unit and emphasized the importance of procreation.

As noted in my earlier article, the essentialism finds its root in Kokoro, a “pistil” who becomes obsessed with motherhood and gender roles after finding a book about babies in some ruins. After finding that book, she advocates for old-fashioned gender roles between the pilots, saying that the differences between men and women should be celebrated because it makes things possible that wouldn’t have been separately. Though Kokoro doesn’t say, “like making babies,” it’s heavily suggested by her newfound fascination with childbirth.

Later, when a group of villain-coded gender-non-conforming pilots visit their squad’s home, they dismiss Kokoro’s support of traditional gender roles. The implication here, however, is that they are in the wrong while Kokoro is bravely speaking truth to power.

Fan reactions to this scene were predictably mixed. Discussions raged about whether or not the scene was political and, if it was, were the politics involved a good or bad thing? One viewer posted:

“FranXX is just depicting the fundamentally apolitical status of the value of marriage, masculinity, and gender roles – it only becomes political when es jay double u’s analyze it with a Western perspective that says heterosexual men are demons.”

This is of course, incorrect. All art is political. All art, consciously or otherwise, reflects the culture it was produced in, carries implicit (and sometimes explicit) biases, and conveys a message to its audience.

The message DarliFra conveyed in that moment was that men and women are inherently different, and to ignore those differences or try to change society is foolish and against nature. It’s expressing the idea that gender roles are good and right, because that’s what builds a happy family.

Since the Meiji restoration, Japan’s state policies have considered “women” all but synonymous with “mother or potential mother,” an equation that Japanese feminist groups have been discussing and fighting for the last century. As Ayako Kano notes in Japanese Feminist Debates:

Modern gender policy has been driven by the assumption that all women will become mothers—and that almost all of them will do so within the context of a married family life. This assumption has made life more difficult for women who do not follow the prescribed expectations of wifehood and motherhood. This assumption has also impeded efforts toward gender equality in employment to present-day. (106)

Japan’s work culture remains incredibly hostile to working mothers, and most women face workplace sexism on both individual and institutional levels. A perfect example of this is the recent discovery that Tokyo Medical University used a multiplier to reduce female applicants’ test scores to maintain a majority-male student body.

Considering all this, Kokoro expresses a dominant narrative in not just Japan, but patriarchal cultures the world over. At Crunchyroll Expo, our own Amelia Cook asked the show’s creative staff: “The gender politics of the show were quite controversial, particularly the relationship between Mitsuru and Kokoro. What message were you trying to communicate and what sort of response did you expect?”

…Without [gender], we wouldn’t have marriage or children. So with the anime I think the idea that gender has meaning, and that it’s necessary to distinguish between boys and girls is something that naturally came through. But that’s not the whole story. There are people like Ikuno, who doesn’t find happiness by marrying someone, by being with a man. I wanted to show lots of different pairings and ways of life. [Mitsuru and Kokoro] are just one part of that, not everything.

But it’s not like we decided on that from the beginning; it just naturally developed along this line. So it’s not like we approached DARLING in the FRANXX with a theme or message to say. How you interpret it is up to you. (Source: Anime News Network)

Although he says they didn’t plan to write in a message about gender politics, both his explanation and the show itself reveal a bias toward gender roles as natural and correct. Claiming that marriage and children couldn’t exist without gender displays his ignorance of the diversity of relationships, childbearing and otherwise, that exist in the world.

DarliFra continues to reinforce its messages about gender roles and reproduction by conveying heterosexual marriage and reproduction as courageous and subversive. Kokoro and Mitsuru, armed with forbidden knowledge about penis-in-vagina sex, sleep together and reconstruct a wedding ceremony that just happens to mirror the kind of Western-style Christianity-based ceremonies that are popular among young Japanese couples.

Their teen marriage is so “subversive” that officials break it up, arrest them, and erase their memories of ever being anything more than comrades-in-arms. Of course, Kokoro ends up pregnant from the night they spent together. Framing young parenthood as “rebellious” and “edgy” comes across as an attempt to romanticize it to a young audience, which led to skeptical viewers making memes like putting Prime Minister Shinzo Abe’s face over screenshots of the show.

Perhaps the most insulting episode is “Inhumanity,” which explores the history of Dr. Franxx and how the world came to be the ruined landscape depicted in the show. An unspecified amount of time before, humans discovered how to make themselves immortal using “magma energy.” However, immortality brought a problem: humans lost their drive to reproduce and thus their humanity.

Science fiction and fantasy have been exploring humans losing their purpose and suffering from ennui as a result of immortality for decades. However, DarliFra takes this a step further and implies that without the desire to reproduce, humans aren’t really human anymore.

This is, of course, an absurd assertion. There are millions of people with no desire to have children or raise families, whether due to asexuality, a dislike of children, or simply not having the time or financial resources to care for a child. It may just be because they don’t want their lives disrupted on that level—the reason doesn’t matter.

The choice of whether or not to have children is deeply personal, and DarliFra’s assertion insults everyone who chooses not to. It’s only a short leap from there to Sugita’s callous comments about LGBT youth.

The narrative struggles with its own depictions of queer characters as well. Mitsuru initially wanted to pilot with Hiro, which implies homosexuality in the show’s symbolic systems, but switched over to Kokoro.

Ikuno, on the other hand, is decidedly a lesbian and often has trouble synchronizing with her male copilots. She’s regarded with some compassion in the narrative, albeit clumsily, and even has a partner in the timeskip—Naomi, the pistil that Hiro had failed to synchronize with.

However, Ikuno pays a steep price for this happy ending: shortly after Kokoro becomes pregnant, Ikuno overexerts herself protecting her against an enemy attack. Her hair turns white as she ages prematurely and must cope with chronic pain. As a lesbian and thus “unproductive,” Ikuno must still devote herself to protecting the progeny of others to be worthy of a happy ending, even at great personal sacrifice.

DarliFra (despite a puzzling detour involving an alien invasion and Zero Two literally becoming a giant sentient spaceship with Hiro piloting her, never to return) ends with the attitude: “Hey, isn’t it great to make babies?” With the former parasites focused on rebuilding a more natural society, establishing shots show nurseries filled with infants.

Each couple also has several children, with Ichigo, Kokoro, and Futoshi’s unnamed wife all visibly pregnant—Kokoro and Mitsuru are expecting their fourth child, while Futoshi is on his third. It’s not an unusual way to end a series, but coupled with the show’s apparent agenda, there’s an unshakable sense that this too is in service of the idea that procreation is the only path to fulfillment.

In a perfect world, the decision of whether or not to have children would be entirely a personal decision based whether or not you feel ready and willing to be a parent. However, that’s not the world we live in, and DARLING in the FRANXX reflects that.

It reflects a worldview that women are first and foremost a womb, and by not having children, they are shirking their duties to society. These politics and their prominent position in patriarchal societies, including Japan, actively harm the women in them.